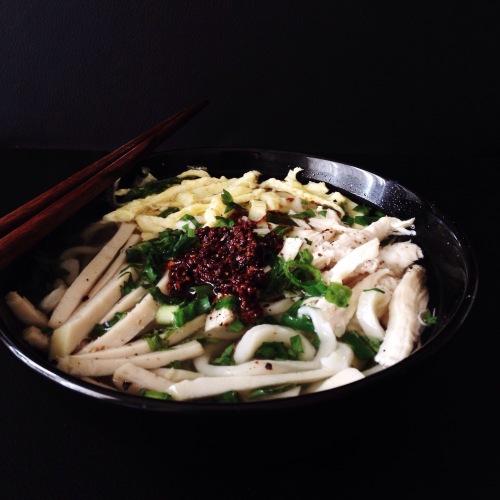 Originally, I was planning on making bun thang today, but Kevin isn’t very fond on some of the vietnamese ingredients that goes in it. He was wanting to have chicken kalguksu (hand-cut noodles), so I thought, “why can’t I make both?” Indeed, that was what I did. The broth that I made suited well for both dishes as they both required chicken, and it came out quite well. For Kevin’s kalguksu, I only used the chicken, egg, green onions, and the chili paste, and everything else you see above, went into my Korean-Vietnamese fusion dish.

I should also note that the hand-cut noodles were a pain to make, since I had kneaded it so much that lots of gluten had formed, and you will really need to put an effort into rolling out the dough. If you can, get someone else to roll it out for you (Kevin put his muscles to work with that). Hope you’ll enjoy the recipe!

To begin, in a large pot add the ginger, garlic, onion, black peppercorn, chicken broth, chicken, and enough water to fill close to the top of the pot, then bring it to a boil. Once it is boiling, reduce the heat to a simmer and allow to cook for 45 minutes. Be sure to skim off any foam so that you’ll end up with a clear broth.

Remove the chicken breasts and set aside for it to cool. Remove all large pieces of onion and black peppercorn that may be floating in the broth. At this time, taste for seasoning of fish sauce and/or salt. The broth is now ready for serving.

To make the noodles, combine all dough ingredients in a stand mixer on low speed with a paddle attachment. You may notice that the dough does not appear to come into shape yet, with some flour still sitting along the sides and bottom of the bowl. Add a tablespoon of water into the bowl as it’s mixing to help it come together. You may need to add another tablespoon of water, if necessary.

Once you see that all the flour has been incorporated into the dough, switch the paddle attachment with a hook, and allow it to knead the dough on a low setting. The dough will be too large for the hook to knead, so you will need to split the dough into two pieces. While one of the doughs is being kneaded in the stand mixer, hand knead the other dough for about 2-3 minutes, then swap the doughs and repeat the process.

Cut each dough into halves, so you end up with 4 portions. Roll out one of the doughs on a clean and dry floured surface. Once you have rolled it out as thin as you possibly could, flour the top of the dough and bring the bottom edge of the dough to the middle. Flour the top of that part, and continue to fold and reflour until you have a long rectangular piece. Thinly cut the dough, then separate the dough along with a sprinkle of flour, to ensure that the noodles don’t stick to each other.

Cook the noodles in a pot of boiling water for about 3-4 minutes, or until it has cooked through. The noodles should be floating when it is done. Place the noodles into a bowl, and arrange the egg strips, vietnamese sausage, shredded chicken on top of the noodles. Add some chopped scallion and vietnamese coriander, then ladle some of the soup into the bowl. Lastly, add in a scoop of the chili pepper flakes and some freshly ground black pepper.